In this behind-the-scenes video, Lynn Lowry (Shivers, The Crazies, Cat People) joins our cast!  We’ve had this up on our YouTube page for a while but never posted it here!  That makes it some kind of exclusive!

There we were a couple weekends ago in January, finishing up a scene we had started shooting a year and a half earlier with the very awesome Jessica Cameron.  Due to some weather weirdness, the temperature had warmed up to the 60’s, though the overcast nasty winter deadness was still a stark contrast to the vibrantly sunny and oppressively hot July day we had shot Jessica’s scenes on.

January 12, 2013: Tyler begs for his life as Stephan considers the ramifications of returning to the compound having not met his quota.

The shots we were doing this day were of a character named Tom and his half of a conversation with Jessica’s character.  Tom had been written as a good-natured perverted hunter and gradually, by the time of this shoot, developed into a vile despicable meth addicted perverted gun-bastard, in part, because the professionally trained actor we cast in the role reminded me of Jack Elam, and the more awful Jack Elam gets, the more fun he is.

But there was no one on set who looked like Jack Elam on that that abnormally warm day in early 2013.  Instead, the character was being performed by Steve Grothaus, our lighting director, (whose previous on-camera work included a bad experience on a film he refers to only as “that accursed thing.”)   Steve didn’t look anything like Jack Elam.  William Fichtner, perhaps. (Whom many of you, no doubt, recognize as “that one guy” from that thing.)  I’ll even accept Steve Carell.  But not Jack Elam.

The 3 Faces of Tom the Meth Addicted Perverted Gun-Bastard. From left to right, William Fichtner, Steve Grothaus, and Jack Elam.  The condom hat on Steve Grothaus has been digitally added for effect.  Wait…  that can’t be right…

To understand the how Steve found himself in this predicament, we need to go back to November 2011 as we were planning to finish the opening teaser scene we had begun shooting with only half the actors in 2009.  Jack Elam Guy had now joined the cast as Tom, and my cousin, Adam Stigler, took the other male role, a character who had been quite ingeniously been given the name “Adam.”

But we still needed a young attractive female who could scream her head off.  Dennis insisted on this because all the other horror movies have young attractive females screaming their heads off and he didn’t want our film to get picked on by the other films.  This was quite a difficult challenge for us, because despite a few exceptions, no girls would hang out with us.

The screaming was critical, because the scene needed to be intense, and as I had learned during the making of my emotionally sterile short film, The Projection Booth, it’s not the ghosts and monsters that makes horror movies scary as much as the reactions of the actors.  William Hurt dressed as a Skeksis isn’t scary.  But M. Night Shyamalan’s The Village creeped me out because Bryce Dallas Howard’s emotion-tricks fooled me into thinking that something scary was happening.

Yeah something scary was happening! A major studio actually greenlit this turd!  Shut up, assface.  I liked it.

In the footage of our opening scene we already had shot, Erin Myers (who plays the other female character in the scene) and I initially went for intense but settled on a much more subdued performance because we felt that this particular character would react to this situation with more of an almost stoic shock and also that it was really the only way to get her to make scared faces where she wouldn’t immediately start laughing uncontrollably.

The lack of emotional displays in this film wasn’t a problem unique to Erin.  Our cast and crew is mostly family and friends.   Everyone I’m related to has the same inability to express any sort of normal-people feelings and, naturally, anyone we choose to hang out with isn’t gonna be one of those sensitive people with emotions.  Ew.  They cry all the time, and I never know whether I’m supposed to hug them or pat them on the head or something.

For instance, on the day we were shooting his death scene (oh yeah, spoiler or something) actor/scientist Matt Funke came to me to express his concern over the scene, saying “I don’t really emote.”

“No shit,” is what I thought in my head, but I think it came out something like, “I know.” 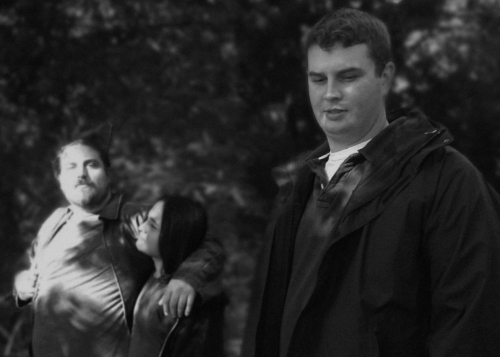 Matt Funke in a moment of intense on-set James Dean brooding as gleeful family members Stephan and Max frolic nearby. I suspect behind that tough exterior is a deep desire to be the one with the cuddle buddy.  I. SUSPECT. WRONG.

In the scene, the Grassman has our heroes cornered and is slowly closing in on them.  Matt suggested we shoot the scene this way:

Matt walks off screen.   A second later, his companions are splashed from head to toe with his blood.

I hesitate to admit this, but I actually ran it by Dennis, who obviously shot it down.  Not that I thought we should do it, but I didn’t have the strength to resist such Solid Gold Jokes and I preferred that he do it for me.  I do love The Jokes.  Oh, how well I love The Jokes. So, for this emotionally charged opening scene, I needed to find someone who not only didn’t have Meyer blood, but never hangs out with me.

Years ago,there was this thing I guess was somewhat like of like our modern Facebook.  Naturally, we didn’t have the technology back then that we do now, so it was primitive by today’s standards, though it served it’s purpose.  It was called “MeTime” or “MyTime” or “MySpace” or something.  No one really remembers what it was called, but what’s important is that this is were I first became aware of Rachel Scott.  There was this video floating around “MyWorld” or whatever it was that was produced by M.A.R.S. Productions, a company consisting of Rachel and her mother and sister.  It was a parody of The Shining starring Jason Hawes and Grant Wilson from the reality tv series Ghost Hunters.

I LOVED them Ghost Hunters!  The first two seasons of that show are a television classic.  I Love Lucy is awesome, but it ain’t got NOTHIN on them Ghost Hunters – Roto Rooter plumbers by day that suit up at night and take to the shadows as paranormal investigators.  In that regard, it’s a lot like Batman, but Batman never had a dude named Brian that he would constantly yell at.  Or a dude named Andy that you suspected the others secretly hated.  Or twin brother demonologists!  WHAT?!!!  Oh, yes.  You heard right.

Me and Grant Wilson & Jason Hawes – Ghost Hunters. If you look closely, you can see me kind of at an angle, I guess, sort of in the opposite direction that the camera is pointed in.

So, here were these teenage girls who did a short with my favorite tv characters (who just happened, in this case, to be real guys).  I checked out the other videos on their “MayYou” page and I remember seeing that they had done a number of ambitious shorts, one of which had gotten into DragonCon in Atlanta around the same time as our film The Projection Booth was rejected by it.   If I remember correctly, they had also done some interviews with some of the scifi/fantasy celebrities.  I found it all very impressive.  Remember, when I was their age, my films looked like this:

Joe Maurits in The Space Traveler (1990). This is when the magical sword Excalibur flies into his hand, just before he beheads an extraterrestrial visitor.  Every time I see this, it feels as though it is my heart who is beheaded.

And even after many many years of experience, at the time I came across their “ManFace” page,  we had only recently upgraded to this:

The heart wipe was meant to be ironic.

So, 4 years later, when I was looking for an actress, I thought back to the girl in the Shining parody, and I remembered her screaming.  A lot.  That was Rachel Scott.  If you didn’t watch the clip, go ahead and check it out.  I’ll wait.  Make sure you skip ahead to the screaming part.  I don’t want to wait too long.  I have six other blogs to write after this.

I got in touch with her online and asked if she was interested and offered to pay her for her time…  which was going to be awkward, cause we weren’t paying the other guy, the professionally trained Jack Elam look-a-like.  In fact, we never paid anyone except our “guest stars” who had recognizable names.  In this case, though, we were running out of time and desperately needed someone.  And she was perfect.

This act directly and brazenly violates Robert Rodriguez‘s no-budget filmmaking advice to never spend  any money ever.  He clearly knows what he’s talking about.  But I took into consideration the advice of another filmmaker, me, when he said, “Spend a bunch of damn money and you’ll be less stressed out.”  Sometimes, I do that instead.

The single most important text for low budget filmmakers I’ve ever read. Also the only one. But hopefully that gives you an idea how important it is.

Plus, there’s this new phenomenon I really had just discovered for the first time that year, in 2011, where when you don’t get the actor you wanted for a role it sucks.  And, conversely, it’s really awesome when you do get them.   I never experienced this prior to then because I always just got my brothers or nephews to do it.  Except for maybe the one time when we were kids and my sister Justine decided she didn’t want to do the movie I wrote and had been planning to shoot forever because she instead decided she had to watch a Frank Sinatra  special because NKOTB’s “Joey Joe” said Frank Sinatra was “totally old school dope.”

So I knew Rachel Scott was the right person for the job and I wanted make sure I got her.  But would she do it?  And what would Jack Elam Guy say when he found out she was paid and he wasn’t?  What would the rest of the cast say if some idiot ever wrote a blog about this and they found out about it?  And why is it we never talk about Steve Grothaus in this series about Steve Grothaus?

I still hate these movie-ruining sons of bitches.